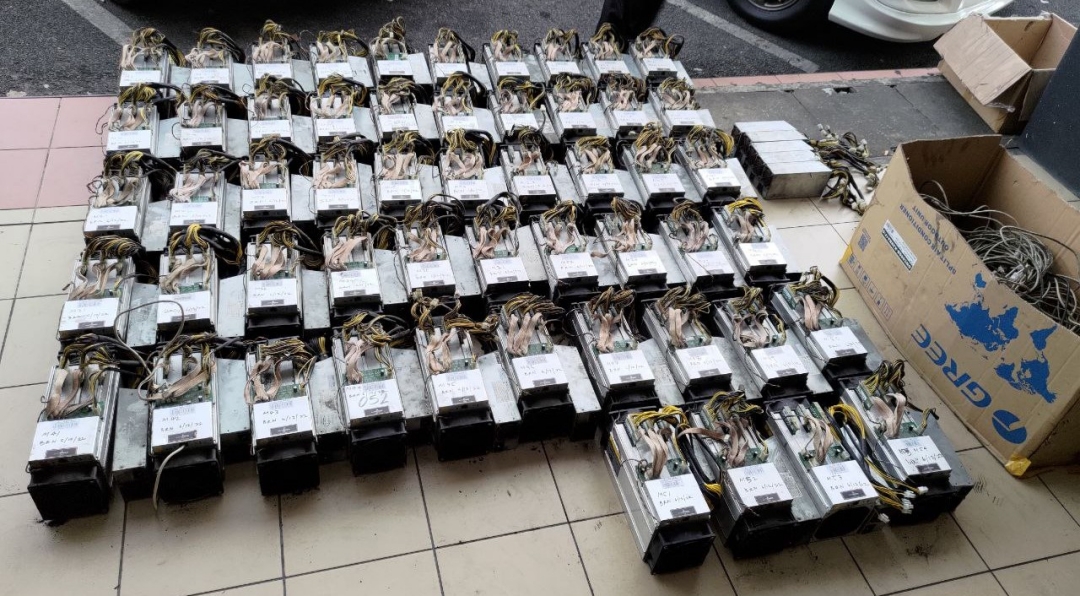 Servers and electronic gadgets seized by the police as evidence of electricity theft.

KUCHING (Dec 24): Sarawak recorded a total of 52 electricity theft cases involving cryptocurrency miners this year, with most of the incidents taking place in rented properties.

The highest number of cases were found in Kuching (25 cases), followed by Miri (22 cases), Sibu (three cases) and Bintulu (two cases). In cases of electricity theft discovery, both landlords and tenants will be called by authorities to assist with investigations to identify the mastermind.

As such, Sarawak Energy in a statement advises all landlords to be mindful of tenants’ activities as they may be implicated if illegal activities such as power theft are found at the rented premises.

The raiding team found 98 units of cryptocurrency mining servers as well as modems, electronic gadgets and direct tapping cables which were connected directly from the incoming mains to the premises. These were all seized as evidence, while police reports were also lodged to initiate investigations.

“Sarawak Energy already offers one of the lowest tariff rates in the region, but power thefts continue to occur. This illicit activity has cost Sarawak Energy an estimated loss of RM21,600 per month due to power theft at these two premises alone.

“Cryptocurrency mining consumes a large amount of electricity as the servers run non-stop and require cooling systems to prevent overheating. Non-standard installations commonly used in electricity theft for such energy-intensive activities can easily overload the electrical system capacity, which could lead to the risk of fires, short circuits and appliance damage,” said Sarawak Energy.

Stealing electricity is a dangerous act and a criminal offence under Section 33(5) of the Electricity Ordinance, which carries a penalty of up to RM100,000 and/or five years jail if found guilty.

As cryptocurrency mining activities remain rampant, Sarawak Energy will continue to work with the authorities to track the masterminds involved and put an end to electricity theft.

Members of the public are reminded not to trust service providers claiming to be able to reduce electricity use or allow premises owners to enjoy unlimited usage of electricity through meter tampering. Sarawak Energy’s meter inspection teams are well trained to detect various electricity theft methods.

Sarawak Energy strongly encourages those with information on suspicious activities related to power theft and on service providers claiming to be able to reduce electricity to contact Sarawak Energy’s customer care centre at 1300-88-3111 or email to customercare@sarawakenergy.com.

All information received will be kept strictly confidential.